Anushka Shrestha, Miss Nepal World 2019, was born on January 18, 1996, in Kathmandu. Growing up in a middle-class family, Shrestha had normal plans in her life to study well and land on a decent job. But she always wanted to become Miss Nepal. In 2019, she won the title and also participated in Miss World 2019. She landed in the Top 12 position and also brought back home the BWAP and Multimedia award. She also won the Head to Head Challenge in the competition. 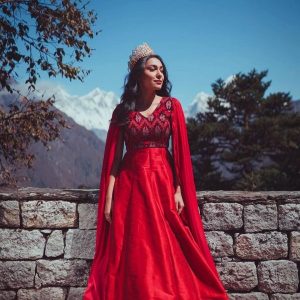 Anushka Shrestha was a mischievous child. She disliked going to school and would often cry when she had to go. She was average in the sense that she did not pay attention in class. But she was an auditory learner, and when she concentrated in class, she would understand the lessons quite well. She would finish her homework on her bus ride to school. It was a 45 minutes ride and Shrestha would finish it by that time.

Anushka as a little girl was not so outgoing and had only a few friends. It was only after grade eight that her friends’ circle grew. She enjoyed more creative activities and was into extracurricular activities. Shrestha did not have any distinct hobby and in her free time, she just liked talking to her friends.

Her little sister was pretty close to her and Shrestha says her sister is her best friend by default. She would feel protected by her sister as she was pretty blunt in nature.

Shrestha was pretty forward in school when it came to house activities and competitions. She never thought she would go abroad for studies because she wanted to do something in Nepal. But after her 12th standard, it was best for her to study abroad in terms of career and growth. She chose Australia for her studies because her father’s cousins were there and they would take care of her. She joined the Australia Catholic University.

Shrestha chose accounting as a major because she wanted a decent professional job. After 1.5 years of her studies, he realized that it was not the line she wanted to pursue her career in. But before she started working in Australia, Shrestha also had worked in Nepal. At the age of 15, Shrestha worked as a content writer in Nepal’s first social media marketing company. It was a work from home but after finishing her intermediate, she even went there at the office to work for a few months. She also taught spelling bees to students.

In Australia, she got her first job at McDonald’s and then also as an office cleaner. But no matter what kind of job she did, Shrestha learned a lot and it was quite an eye-opening opportunity for her. There were quite a lot of hardships that she had to go through and at one point she often sat on a stairway while dusting and then contemplating what she was actually doing with her life. She did academically well but she was not sure which way she was moving ahead.

Later, she met a friend in Australia who came from a more facilitated environment in Nepal than her. After talking to her, Shrestha realized that she wasn’t the only one facing hardships on foreign land.

As soon as she finished her undergraduate, she landed a job at Commonwealth Bank of Australia as her university allowed 2 years full-time job after graduation.

Later, she also went to Vatican City for her career. It was the first big risk she ever took. It was an unpaid internship and far from her comfort zone. Because she had no breaks in between her education and career, it was a good time to spend alone and think about her life. Before coming back to Sydney, she got a job offer as an assistant to a student advisor.

Before joining Miss Nepal, Anushka wanted to check if she was a suitable candidate or not. So, she joined Miss Oceania that happened every year in Australia. While seeking the direction to enter Miss Nepal, she decided to join Miss Oceania in 2018.

When she was in Nepal, Shrestha had no plans to go abroad. All she ever wanted to do was in her home country. As she did not have a particular hobby, she was always fascinated with Miss Nepal. Her observations on the previous winner of Miss Nepal sparked a thought inside her. For impactful community work in Nepal, this beauty pageant journey was a huge platform. She knew one day she would try for the beauty pageant but didn’t know when.

Her confidence was not quite strong when it came to actually participate but she had to know that she at least tried. She knew the platform would help her serve the community and people would take her seriously. For this reason, she dared to participate in the beauty pageant.

She left her job and came back to Nepal. It was March 2019 already and she already started her Miss Nepal training. After two months, it was the finale. Her preparation and training were happening together and she was quite busy. She gave her best and did not let anything bother her. Shrestha explained her time as a sturdy horse in a race.

Shrestha won the Miss Nepal 2019 title. It was the first time she praised herself and felt like she did a pretty good job. Shrestha had a diary where she wrote her life goals, one of the goals was to become a Miss Nepal. And she says somehow what she wrote was what she manifested in life.

But the journey still did not end. The pressure for Miss World was next. Former Miss Nepal Shrinkhala Khatiwada was the first person who consulted her for help. She was generous enough to let Shrestha know about the challenges she faced on the big stage and how she tackled it. Shrestha also learned that visual representation in the big stage would be one of the key factors for her presentation. Shrestha reached out to Paradygm TV, a video production team with their own YouTube channel famous for their reaction videos, cinematography, informative content, and more.

Shrestha had her own concept but wanted the typical vibe of the Nepali lifestyle. Although she lived abroad, she wanted to show how her heart truly belonged to Nepal. Through Paradygm TV, she met Darshan Pokharel. He was responsible for the introductory video and Beauty with a Purpose video. Pokharel explained about the process of producing a video. Shrestha also got in touch with Deepak Bajracharya because “Man Magan” – a composition by Barjacharya – was what she wanted to use for her video.

Shrestha had money saved after winning the Miss Oceania title and she wanted to use that money for her Beauty with a Purpose project. She went to Solsing, a village in Helambu of Sindhupalchowk district. She instantly fell in love with the spirit of Solsing. The people there were doing the best they could, they were helping themselves first and this was what ignited the fire in Anushka as she is an avid believer of doing what’s best for you.

It was the first time she experienced village life and the connection became powerful. It was a life changing experience for her because she obviously came from that side of Nepal that had access to a lot of things. Arrogance aside, she knew she had to get adjusted with the peoples’ need there.

There in Solsing, Shrestha did not just give the people what they needed, but she taught her how to gain something that they want. She gave a source of income to the people there. She took the initiation of livelihood generation. But before she did anything, Shrestha and her team took a survey to figure out the major steps. The end results were lack of electricity, proper road access, livelihood problems, and education facility for the children.

The Miss World finals was in December of the year that Miss Nepal took place. Shrestha attended countless meetings and worked with so many important people to get help for she was trying to lift an entire community.

She got help from the government and created a proper road access for the people. She teamed up with private schools of Kathmandu, hired four more teachers, and built a school there. Lunch breaks were introduced and the dropout rate of the students there was a drastic downfall from 90% to 0%.

Next was livelihood generation, she brought carpet weaving as a new form of earning money. Shrestha provided training to the people there which also included stay at home mothers too. Shrestha and her team also initiated a job of making incense sticks made from the herbs that are available within that area. Moreover, there was candle making training. It would solve the electricity problems. The products that the locals make are sold in Kathmandu. And there were also brick making training that would construct a new trekking route there.

It took a lot of effort and it did get her the Beauty with a Purpose award. In addition to that, Shrestha’s confidence also won her the Head to Head Challenge. Nepal was fully on her support and this got her the Multimedia awards. Shrestha was on the Top 12 and brought home not just the awards but also a big smile.

Shrestha became someone that the entire nation was proud of and then her lifestyle changed. She had to learn to be presentable both online and offline. Of course, the responsibility grew and her parents feel more confident regarding whether or not their daughter is on the right track.

Shrestha is still working on making society a better place to live. She is also helping her mother promote her boutique Muku, which included the dresses that she flaunted in her beauty pageant journey. She is also planning to have her own commercial business.

Anushka Shrestha is the Miss Nepal World 2019. Her father is Anil Shrestha and her mother is Mukta Shrestha – who is a fashion designer and owns the boutique Muku. Anushka has a little sister, Aisha Shrestha.

After finishing high school, Shrestha joined Australian Catholic University and an accounting student. After working in a bank and visiting Vatican City, she came back to Nepal for Miss Nepal 2019. She won the title and also participated in Miss World 2019.