Ashesh Malla is one of the most respected and renowned theatre directors of Nepal. He was born on November 25, 1954, in Dhankuta District. He is the inventor of street theatre in Nepal and has contributed not only in writing scripts but even acted in theatres as well. Malla is an avid lover of performance art and is a co-founder of Sarwanam Theatre Group.

He performed his first act at the age of eight. Having an extreme attachment for performing arts, literature and love for the nation, he has also been a victim of public fight because he portrayed political affairs in his act. Malla started doing playwright but first, he used to perform.

Today, he is the founder of Sarwanam Theatre Group. The organization provides a platform for students of performing arts and also conducts frequent programs. 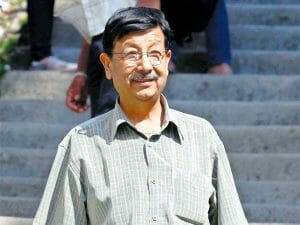 Ashesh Malla grew up in Dhankuta where the time was not quite advanced and electricity or seeing vehicles was fascinating. His childhood was full of authentic culture at its finest existence. People had a simple life but the culture there in Dhankuta was rich.

Malla loved theatre and performing arts at a really young age. While his friends used to get excited for Dashain and Tihar, Malla was eager for Gaijatra. During Gaijatra, there were lots of dramas, dance, and everything entertainment. It is a big festival celebrated in Dhankuta.

It is a part of history that after Prithvi Narayan Shah fought his last battle in Bhaktapur, many people from the Malla clan ran to Dhankuta because of the unsafe environment. Some even changed their surname. But regardless of where they had to adjust, the Malla clan did not forget their culture and brought it alive wherever they went. Among them, one of the cultural beauties was Gaijatra. Those people were also Ashesh’s ancestors.

Malla enjoyed theatre arts so much that he wanted to be a part of it. His first performance was also on the occasion of Gaijatra. One day, when all the performers were having a meeting on what they will be performing in that year’s Gaijatra, Malla was at a corner listening to what they were talking about. But more importantly, he was there in the hopes of getting a role for himself. He was hoping that if he stood there, the performers would notice him and offer him a role. But he never got the role because he was really young.

Little Malla’s heart was shattered but he was furious inside too. He decided that he will organize his own act without anyone offering him any role. The next year, he gathered all of his friends from the neighbourhood and told them about his plan. They prepared a small act where he acted and his friends danced. The act was a caricature of one of his friends who was a bit different abled. His act was loved by the audience and that is how he started. After that, he got many roles whenever a child character was needed.

Malla had a really good leadership quality and disliked working under anyone. Due to his quality, he could handle people in an organized manner. There were many small clubs in Dhankuta and Malla wanted to start his own club as well. He started Bal Sudhar Sangh in one of his home where he also had a library. The club was used for performers and there were theatre acts. But he was not allowed to have his own club.

Malla already started his career as an actor. After frequently getting offers when there was a demand for child character, he continued theatre acts. He was continuing in Gaijatra when he had to write an act too.

It was between 2031-32 B.S. when Malla along with his friends and mentor started their own organization for performing arts. It was called Nawa Kalakar Sanskritik Samudaya. His first playwright was for this association they had. They needed a hall for rehearsal so they went to the school they studied in – Gokundeshwor High School.

In the small stage, they performed dramas of B.G. Malla, Man Bahadur Mukhiya, and more. Those days did not have a lot of equipment back then. People had to use their innovative mindset to give the stage an illusion of the act. There in that stage, Malla and his team also conducted the first act with a ticket system.

Malla used to write poems back then and his writings would also get published in a newspaper publication called Lalupate. His team encouraged him for a playwright. They said that their act should have its own writer.

The team would rehearse for 20 to 25 days for one act. They would continue to the next act after the first one was done. The team would discuss and plan who would take over what role and they learned without any guidance in performance art. They did not learn how to do it but their interest got them to perform well.

They showed the act for about 20 days because it gained massive attention. Everybody praised it and the team was shocked. They decided to take that performance in Kathmandu and so they went to Kathmandu. It was not easy but they carried all the equipment with them. They did not have a sufficient budget so they performed in Dharan and then in Biratnagar and then Janakpur. They reached Kathmandu after 4 days.

In Kathmandu, they met Satya Mohan Joshi and told them why they came there. After learning about their journey, Joshi was so shocked that without any approval they got to perform in Nepal Academy. They did not have to give any money and were told that the amount they received through the act will be divided between the organizers and them.

Their act became such a hit that even the late King Birendra and his family came to watch it without any notice. Everybody enjoyed it but what one particular criticism was a bit too harsh for Malla. Bijay Malla, one of the members of Nepal Academy scrutinized Malla for writing old stories and should write something modern.

He continued writing for Gorkhapatra and Radio Nepal to afford to live in Kathmandu. His work on Radio Nepal was also a favorite among the audiences.

Street act and other works

Growing up, Malla was always fascinated by how people would refer to his father as Sir. He dreamt that one day people will call him Sir as well. His father also used to receive letters from the poet Khagendra Kumar. Then, he idolized people calling him a poet too.

After that, he slowly started writing poems. He kept continuing and today, he is also known as a poet. His poems are similar to the style of Gopal Prasad Rimal.

After completing his MA, Malla remembers lying on the ground outside his hostel and wondering what he would do next. If he returned back to Dhankuta, there would be a full stop for his dreams. For theatres, there are requirements such as lights, cameras, dress, microphones, and a stage. Malla was lost in thoughts while questioning why it wouldn’t be possible to perform an act without certain requirements.

It bothered him for days, but a voice inside him said that he can somehow bring out the skill without anything else. An artist needs a space no matter what form it is, and Malla believes it was all he needed. The space was not just a stage for him. This was the thought that came before street theatre was born.

There were many scripts of Malla which were banned, but his act “Hami basanta khojiraheka chau” was something that the CDO office did not quite get the literal meaning. As a writer who covered stories on real life incidents and country status-quo, it was quite a shock that his act did not have any obstacles this time. “Hami basanta khojrakheka chau” was an act that was a satirical representation of wanting democracy instead. It was the first act of street theatre.

According to Malla, art is an aesthetic sense. And he represented that aesthetic sense in “Hami basanta khojiraheka chau”. No matter what topic you choose to cover, Malla says all you need is art. With this act, he became the pioneer of street theatre.

Malla always disliked the fact that on any drama, there would be a lot of time wasted whenever it was time for the next scene. Closing the curtains and working behind the stage to set up the ambiance was something that Malla found distractive. So, he challenged himself that he would not use any curtains or other set ups for his street act.

He broke all the norms and shocked the audience with his planning. His innovative plan brought a new level of excitement amidst the audience. It was not difficult for him because of zero technical equipment but it was a very organized act. Malla compares the theatre act to a pregnant woman. It doesn’t just happen; Everything is taken care of and everything is planned.

Malla was born and raised in Dhankuta. He did his schooling in Gokundeshwor High School. For his BA, he went to Biratnagar in the year 2031. During holidays, he used to come back to Dhankuta for his theatre works of the playwright.

He got his big spotlight from his performance at Nepal Academy in Kathmandu. After the act, he stayed in Kathmandu to study MA in Tribhuwan University. Despite not having any training in arts, direction, writing, and acting, Malla gives his gratitude to Bal Krishna Sama and Bijay Malla. It was because of these men that Ashesh Malla was inspired. He explains them as a big mountain in front of him – mighty and big. He wanted to be something as well but not similar to that they did. Malla wanted his own identity with something that he created first.

Malla is the youngest son of the family with two elder brothers, one elder sister, and two younger sisters. He is married to Dr. Sabitri Malla Kakshapati and they have a daughter together, Sampada Malla. Sampada is also a scriptwriter.