Dev Rana, one of the most iconic drummers of Nepal was born on June 18, 1952 in Sungai Petani, Malaysia. Rana has entertained the music lovers for almost five decades and has massive respect from the audiences as well as today’s rockstars.

As a drummer of Prism band, he managed to rock each and every stage that he performed with his group. His love for music got him massive respect from the audience and he is still continuing his journey as a freelance drummer. 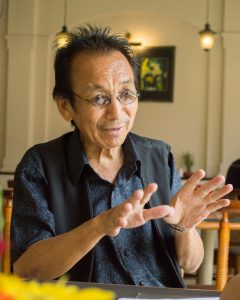 Although Rana was born in Malaysia, he was not raised there. His father brought him back to his hometown, Palpa. He went back to Malaysia for education but in a different city named Kluang. Rana then started living in Malaysia as a teenager.

Rana’s father was a member of the British army. And even though his father was not well educated, he wanted Dev Rana to study. Rana studied in a Gorkha School till the fourth standard. It was a privilege for British Army that if they were in an officer post, their sons or cousins could study in British School if they could qualify. Rana joined British School at the age of 11.

Rana was an average student and he was more into extracurricular activities. He was a member of the drama squad and used to participate in every drama. Rana also played football but wasn’t a very good player. He was into sports and other activities. But after joining the British School, he was introduced to guitars. He loved playing guitar and also made a lot of friends in the process of learning the instrument. Since Rana had a very well-spoken English, he could communicate well with his friends as well.

Because of his speaking skills, he was quite confident in public speaking and taking part in poetry as well. Rana was always a social person and loved interacting with people. The British School background, British friends, and the music there got him into loving western music as well.

Whenever he used to come back home, he also used to have music albums of the rockstars like Jimi Hendrix, The Beatles, and Elvis Presley. Because of the sense of style that the singers had, Rana’s father would tell him to hide the album covers when there were timely army checks at their house. The army were expected to be disciplined and the pictures somehow were unusual for them because it might have caused a different impression.

Rana came back to Nepal after his father got retired. It was quite difficult for him to fit in when he joined St. Xaviers School. The English there was not that great and he often got teased by his friends. But later, he became the most admired kid of the school.

Rana had a very good friend from St. Xaviers named Uday Thakur who had a drum set. He was a good drummer and Rana would go to his house and they used to jam together. Thakur’s father had to shift to Japan because of his job and Thakur had to go there for studies as well. After going there, he said that he quit drums and gave it to Rana. That was how he also became a drummer and not just a guitarist.

Rana immediately loved The Beatles after he heard their song Love Me Do. Ringo Star, the drummer of The Beatles caught his attention. And although Rana could not understand what Ringo was doing back then, he just loved the beat of the song. Another drummer that inspired Rana was Mitch Mitchel when Jimi Hendrix entered the music world.

While learning guitar, the seniors from his school used to teach him. Among them, Man Singh Gurung was one of his seniors who taught Rana how to play guitar and drummer. Gurung was his mentor and both of their parents were from the same boundary.

Rana came back to Nepal, spent some of his young days here, went to India to work there on television. He was always drawn to entertainment and his father was quite supportive. In Lucknow, he played music in a hotel with a Hindi band who were from Bengal.

It was the year 1978 when Rana was still working in India, two music bands were formed in Nepal. There were only two professional bands in Nepal at that time. One of them was The Brotherhood. The band once had a performance at Yak N Yeti hotel which was a grand event then.

Pemba Lepcha, George Subba, Prolad Roka, and Dinesh Rai founded Prism Band in 1979. There was a spark of opportunity for Rana to come back to Nepal and join the band. His son was only 1.5 years old at that time. But after two years of starting Prism Band, Rana joined the group as well.

Before joining the group, Rana was not sure what he wanted to do and called it a confusing phase of his life. He had already married, had a son, and so he had a huge responsibility as a father and a husband. The job there in Lucknow, India taught him that he had to do something that he loved.

One day, he got a letter from one of his friends, Subarna Limbu. Somehow, in an era where phone conversation was not common, Rana got a letter from Limbu. He was remembering Rana and informed him that there is a platform for musicians in Nepal and asked if Rana would like to give it a try. He came back to Nepal in 1980. He noticed that people were already accepting the modern trend in Nepal. People could have long hairs and could wear bell-bottom pants, and most importantly, sing freely.

Rana loved the change, he was so happy that he could share music, love, and story with his friends.

Pemba Lepcha, was the one who helped Rana a lot to shape his career in music. Lepcha brought Rana as a drummer in Prism. George Subba was generous enough to give him enough space and also agreed on sharing the budget they received. Subba then joined another genre and Rana became the official drummer of Prism Band.

The Prism band performed in five-star hotels like Soaltee and they were, indeed, very big. They also performed English songs and the responses from the audiences were also amazing. The 80’s era was all about the Prism band and they received invitations to perform at every party. The crowd was massive only because of them and they rocked the stage like no one else.

They used to play 70’s songs as well. There were a lot of cover songs they used to perform and they got popular really fast. And Dev, he enjoyed what he was doing, he loved what he played and enjoyed it to the core. Prism used to be everywhere, from top hotels to foreign projects.

Other works - After Prism band

After quitting Soaltee and after all the members of Prism band went their own ways, Rana still continued playing drums for various artists, performing on stages, and doing live shows. He also performed in HongKong. Rana also worked with Ishwor Gurung for Namaste Band for a short time.

Dev Rana then met Jyoti and they worked in a band named Gentlemen. He was invited by the founder of the band, Kripesh Lohani. After one of the members quit, it became a three-man band.

Rana is currently involved with multiple groups and still performs and shares the stage with the band.

Dev Rana was born in Malaysia and studied in British School. After a few years, he came back to Nepal and continued his musical interests in Nepal. He used to love playing the guitar and drums. He grew up listening to the biggest rockstars in musical history such as The Beatles and Jimi Hendrix.

Rana was married and had a son, Dennis Rana. But unfortunately, he lost both of them. It was a big lesson for Rana. Despite all that has happened, Rana is still working as a freelance drummer. It has been almost 50 years that he has been working as a musician.