Dil Bhusan Pathak, one of the most loved and hard-working journalists of Nepal was born in Jhapa on June 16th, 1972. He started his journey as a news editor, grew as a news anchor, and made documentaries to make people aware of humanity. Most people know him as the TV host of TOUGH Talk.

Pathak’s fantastic documentary and reporting skills made Nepal aware about the tradition and crimes that should be changed. His documentary has also gained international exposure. A humanitarian and sociology expert believes his media works are to give power to the helpless and raise their voices. 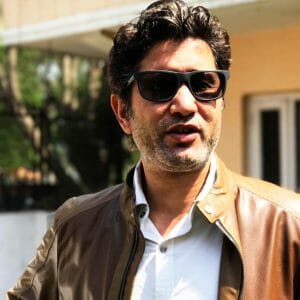 Growing up, Pathak was a really shy kid. He used to struggle to even stand still in front of people. He had a reserved nature and it went on in the earlier days of his school life. In his senior years, he started feeling confident and also participated in events where he had to do public speaking.

Pathak would be confident on stage but when he got down and went back to his friends, he was the same introverted Pathak that his friends knew. He still did not have an awesome speaking skill that the Nepalese know of him now.

His parents wanted him to become a doctor. But his teacher would say that he would be a good politician. After SLC, he decided to join mass communication in Ratna Rajya Campus. There were no other colleges in Nepal in those days where he could study mass communication. He also felt like that college was like his home country because students from different parts of the country were studying there.

Although Pathak’s parents wanted him to become a doctor, they were a bit disappointed when they learned he wanted to do journalism. But even if Pathak wanted to, his performance in school and his capacity was on the level of studying doctorate. Pathak was more into liberal arts than he was in science and mathematics. And also because he frequently changed school, the environment affected him. Nevertheless, his father was pretty understanding and took it positively.

The Kathmandu life for education was quite different for him after leaving Jhapa and reminisces the days where affording certain things were limited.

Right when Pathak was in the second year in Ratna Rajya Campus, Kantipur publication was started. The year was 1949 and it was the first time in Nepal that a big scale daily news publication was established. The team was huge and was also seeking more members.

Hari Bahadur Thapa – former editor of Annapurna news – took Pathak to Kantipur after approaching him to edit a news article. There were two articles from Birtamod, Jhapa that he had to write. Ravi Adhikari gave Pathak the two reporting and Pathak wrote it in a form of the news article. After finishing the edits and handing it to Adhikari, he read the articles, looked at Pathak, and then to Thapa and said that Pathak could start working from that very day.

Thapa said he could start working tomorrow, but Pathak interrupted them and mentioned that he did not quite write the articles to get the job. Pathak was still studying and did not want any distractions. Ravi Adhikari convinced him and Pathak was immediately convinced because, indeed, was a huge opportunity and the salary was attractive as well.

Pathak joined Kantipur three days after it was started. After about 5 years, he had to shift to Nepalgunj for his job. Kantipur had new branches and Pathak was assigned in Nepalgunj. He was fascinated with the eastern news of Nepal. There he met publishers like Yamaraj Gulmi. Then they had to shift to the regional office.

At first, he did not like the fact that he was getting transferred to Nepalgunj was ready to resign. But one of his senior colleagues encouraged him to enjoy his youth. Pathak had a bike, a guitar, and all the time to explore. And so, he started enjoying and learning in that process. He met a lot of people, saw a lot of different cultures, and some who praised him about his post in Kantipur news. There were so many incidents that he could do reporting from.

One of the top reporting news that Pathak shared was the Rapti case. The case included a male who used his wife like a puppet in his works. The wife did not have proper education but made her a winner as a representative of the village. He wrote the news on that topic and made big anchor news. It was written on the perspective of both sociology and politics. Many people learned about such local news because of Dil Bhusan Pathak.

His dedication and passion for journalism still give him goosebumps.

Being a news anchor to a documentary filmmaker

Working in Nepalgunj was a major turn for Pathak. He used to do warzone reporting and Karnali had a lot of subjects that attracted him.

Then, Nepal TV announced a broader expansion of the news publishing sector. The television world decided to have a platform for local voices. There in Nepalgunj, Pathak saw broadcast for news anchors. The show was to be presented at 8 PM. Since Pathak could finish his work as an editor before 8 PM, he decided to enter the world of television as well. Then he decided to apply for that job as well where he decided to read the news too.

He used to travel 16km on a bus with his bike at the top of the bus, and then 32km extra on his bike. Pathak used to eat supari so that he could stay warm on the chilly winter night for a 30 minutes show. His earning was only NRs 250 per show. His love for TV and journalism forced him to be dedicated.

Pathak was so in love with the local cultures and villages that he also did his thesis of Humla for his master’s degree.

After his long journey, he came back to Kathmandu and got the post of Editor in Chief. Slowly, as he understood how to present on TV so he worked as a coordinator of Kantipur TV. The first bulletin of Kantipur TV was read by Pathak.

One day, he got news of Achham where a woman was raped and got pregnant. It was normal in Achham to kill the unborn baby by pushing plant branches inside the reproductive organ of the woman and stab the baby with it. As soon as Pathak got the news, he went to Achham the same day and decided to document the story. The documentary became so big that it articulated on many international festivals.

Then, many organizations offered him to make documentaries for him. After getting exposure in the field of documentary, he left Kantipur TV. He decided to give power to what he was presenting and raise the voices of the locals.

In Kantipur TV, he also did TOUGH Talk. Pathak wanted a show where he could make the guests feel important and be able to present their point of view rather than only focusing on presenting a show. The show was incredibly successful. And even though the show was named TOUGH Talk with Dil Bhusan Pathak, the TV channel wanted to have the ownership.

Because the ownership issue did not go well, Pathak quit Kantipur Television and joined Himalayan Television. After taking break and making apparances in big cinemas, he came back to Kantipur as prime coordinator in 2015.

Dil Bhusan Pathak has also been part of a few dramas. During his break from Kantipur Television, he made documentary films and also got few offers. Because of his acting skills that he learned in his drama days, he has also appeared in a few Nepali films. He has worked on Intu Mintu Londonma, Mokshya, and Dhanda.

Dil Bhusan Pathak was born and raised in Jhapa. He came to Kathmandu to study mass communication in Ratna Rajya Campus and did his masters in Sociology from Tri-Chandra College. He has also done a Ph.D. in mass communication and journalism.

Pathan started a show called TOUGH Talk which couldn’t continue because he didn’t have his own platform. Now, the show is available on YouTube. The show was not just for learning the point of view of the guests but also to keep it documented so that it will be useful in the future as strong pieces of evidence.

Pathak has given a meaningful definition in journalism and documentary where he gives voice to the weak and passes the news to wide boundaries.