Kali Prasad Baskota, a popular musician, lyricist, singer, and writer was born on 16th December 1979 in Kirtipur. Growing up singing Bhajans in Kirtipur, Baskota ended up becoming a hit playback singer. He has given voices in songs of popular films such as Resham Filili and Loot 2. Not only in films, but he has given other hit songs like Chahana Sakiyo. His song Thamel Bazaar was also one of the most viewed Nepali music videos on YouTube.

Later in his journey, he became one of the judges in the number one music competition of Nepal, Nepal Idol. Baskota has won numerous awards and has also given a big breakthrough to amazing singers, one being like Hemanta Rana. 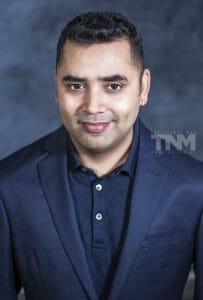 Baskota had a simple lifestyle in Kirtipur. To go to school, he had to walk 45 minutes walking distance to the top of the city. He was a shy kid with only a few friends and used to get scared of teachers. Because the neighborhoods in Kirtipur were full of Newari people, it was difficult for him to make friends. Baskota studied in Puspa Sadan Boarding School which was the most popular school in Kirtipur.

Even when he was studying in Nursery, Baskota already learned how to sing Sa, Re, Ga, Ma. Baskota’s father was a huge Kishor Kumar fan. Baskota grew up listening, enjoying, and admiring Kishor Kumar’s songs. His childhood days were spent less on playing football outside and more on playing utensils inside home and singing. His first Nepali teacher was one of the most loved singers in Nepal, Kunti Moktan.

He was a secretive boy and he also wrote poems that no one knew but himself. Besides singing, comics was also one of his interests. Baskota also went to learn harmonium in his school days. He was already into Bhajan Kirtan and it was his first learning in music. He wanted to learn harmonium because he loved bhajans.

Baskota was a mechanical engineering student. But even during his study, he did not take a break from singing and music. He used to take formal lessons while he was pursuing his engineering degree. He was a smart student who could understand everything in class with less effort. That indeed was the same in music too.

But, he could not do well in his engineering as he expected because of music. He used to wake up at four in the morning and would practice playing the harmonium. His morning sessions somehow acted as an alarm for the neighbours.

Kali used to write poems when he was little and also got interested in literature. But he stopped after building a habit of watching movies. Not only movies but he also watched llot of shows and wouldn’t miss his favorites on the radio too. In certain programs, he would also call and sing songs.

Since he came from a strict family, he had pressure to get a decent job. And that was  why he studied mechanical engineering. But after he gave his last exam, he worked as a music teacher in 5 different schools as a part-timer.

Baskota wouldn’t quit music easily and had two friends with whom he decided to release an album together. Baskota composed some music and they met Sunil Parajuli. Since he was still working as a music teacher, he went to Opus studio earlier than Sunil. Sunil also helped a lot in Baskota’s composition.

Baskota learned how to play the keyboard and also learned how to arrange the tunes on the computer. He also played in casinos to earn some money but did the job only as a part-timer. Later, he also worked on a website named fursad.com. Slowly, he got into composing his own music.

Then, he started his work at Tilganga Eye Hospital for almost 15 years.

Gaining recognition as a music composer

Baskota’s first composition was Chahana Sakiyo which became a massive hit. It wasn’t a planned piece of music but it was something that he finalized after just arranging music. Baskota refers to it as a dummy song. He had also recorded a song once in 2003 after his SLC. But he hated his voice so much that he stopped singing after that.

Although he could not sing, many of his compositions won awards. After Chahana Sakiyo, he composed Laijare, which also became a massive hit. His compositions were admired so much that Sugam Pokharel called him and praised his works. Laijare was indeed a breakthrough success for him.

While planning for Laijare, Baskota heard so many good things about Hemanta Rana’s voice. One day, Rana came across Baskota’s lyrics of Puranai cha Bato Puranai cha Goreto. He loved it so much and told Baskota he wanted to sing it. Later, Baskota wrote a song especially for Hemanta to sing. When Baskota sang for him, he really enjoyed the song and wanted to sing it. And Laijare was also the song that gave Hemanta Rana his breakthrough.

It had already been a decade of Baskota working at Tilganga Eye Hospital when Laijare was released. Meaning, he was still working there when his music was reaching a peak. After about 5 years later, he appeared in Nepal Idol as one of the judges. After the massive 2015 earthquake, Baskota quit his job at Tilganga.

Although Baskota thought of never singing again, he did come back to singing. For the superhit song Pari Tyo Dada Ma from Resham Filili, Baskota wrote this song but unfortunately, they could not record the song. He wanted Jayananda Lama to sing the song. But Jayananda Lama was out of reach.Since there was not enough time, they decided that they will release only a lyrical version of it.

During the release of the movie Resham Filili, some  lyrics of the song were presented and there was high demand from the audiences to release the song. After deciding they will release only the lyrical version, Vinay Shrestha, actor of the movie suggested Baskota to give his voice to the song.

Baskota agreed easily and when some of his friends including Hemanta heard it, they loved it. After that, he started singing again and has given other hit songs like Nira, Sali Man Paryo, Heri Rahana Deu and more.

Kali Prasad Devkota was named after the goddess Kali by his father who was her devotee. There was a Bhakal puja when Baskota was born. And as prasad of Dakshinkali, he got the name. He had a strict family and his family wanted him to have a good job. Because of this reason, he also studied mechanical engineering. His education background got him a very good job in Tilganga Eye Hospital. After working there for almost fifteen years, he quit.