Sugam Pokharel, one of the most loved Nepali singers, was born on September 20, 1979, in Mangalbare of Morang District. Pokharel is that singer who has given numbers of hit songs since 2000. His musical career also includes other popular singers who have featured him in their creations. Even if it has been two decades already, Pokharel’s songs are not forgotten by the audiences and they remember the song word by word.

Pokharel grew up as an average student who was in love with music. He knew he wanted to perform on a big stage from a very young age. After coming to Kathmandu, he knew he had to work on his dream. After gaining massive popularity, he did go through some rough patches in his life with big mistakes, but he came back as a changed human being. 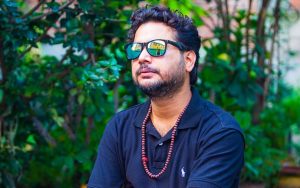 Growing up, Pokharel was not the kid who talked too much. His daily journey was only between home and school. He had only a few friends and his childhood was not full of extreme mischief. It was only after he reached eighth grade that he started going out a little and started making more friends.

Despite the transition from a shy kid to a young boy, his love for cinemas and music remained unchanged. He used to come back from school and listen to music on the radio everyday. He was drawn into the world of performing arts and music. Pokharel’s brother – Sunil Pokharel – and his sister-in-law were already artists so he was already attracted to cinema and music. They had their struggles but had already made it in their field.

Pokharel’s interest would often drag him to sing in front of his friends in school and he used practice alone as well. Even when he bought music cassettes, he would see what the recording labels were, who the arrangers were and did his own research.

There in Terai, Saraswati Puja is greatly celebrated. Other audiences that Pokharel would perform in front of after his friends were in Saraswati Puja. He would go there and perform for the sake of entertainment but it didn’t make him happy. He always knew it wasn’t the kind of stage that he wanted. He wanted something bigger and something only meant for his music. No festival, not a random crowd, but a genuine audience only there to listen to him.

Pokharel had loving parents and although they were attentive towards his education, they never stopped him when it came to pursuing his musical interests. Thanks to his brother Sunil who belonged to a similar background, it was not that hard for him to be open about it in front of his parents.

Sugam finished his schooling from Biratnagar and came to Kathmandu for further studies. But after coming to Kathmandu, he knew he would do something in the field of music.

After coming to Kathmandu, Pokharel joined RR Campus. He knew that he had to release at least one album after coming to Kathmandu. His friends used to motivate him whenever they knew he was finding out about the companies and recording labels. Even though it was very much clear that he came to Kathmandu for studies, his learnings on music studios, arrangers and other details had helped him to know whom to contact.

After joining RR Campus, he met Sudin Pokharel (DA69), a top Nephop trendsetter of Nepal. They both got along pretty quick because of their common love for music. They then decided to record a song together. They did record a few songs together but the young boys could not have the recordings in a good quality. They did not have enough cash so they had to struggle together to release a song in good quality.

Among the recordings, their first song together was “Ma Ghar Janna” which was randomly written by one of their friends in college.

Fortunately, they met Bibek Pokharel and he took them to Jems Pradhan’s music studio. They recorded a song titled “Payera Maile Timilai Yesto Khusi Chu” which did not become quite successful. Going there in the studio, they established a connection with Jems Pradhan.With Pradhan’s help they then recorded “Panchii”. The duo did not have a powerful compatibility and both had their own priorities. It was their last collaboration.

Sudin had gone back to Biratnagar after completing education in RR Campus and Sugam wanted to go abroad to earn more and be self-dependent. But destiny came as an obstacle and Sugam could not go. After that, Pokharel started working as a librarian in Radio Sagarmatha. The company had many shows about music and that helped him a lot to learn about music. He also learned what he wanted to do in his musical journey.

Pokharel already felt like he wasn’t doing anything in life. But while working in Radio Sagarmatha, he used to go to music studios and still practised in the evenings. Radio Sagarmatha also taught Pokharel how to build connections with singers, musicians and other people. The connection was slowly building a path for his smooth musical journey. It was a learning curve for him.

Pokharel wrote his first song “Mero Sansaar” and it was his first song that recorded solo. His first song became a super hit. The song also introduced auto-tune for the first time in Nepali music. But talking about his speciality, Sugam mostly wrote tragic songs.

Going abroad to earn more in life was Pokharel’s  plan, but his happiness lied in his music. The first song already gave him a bigger hope in music and then, he decided to completely focus on it. He sacrificed his abroad plans and became more dedicated to music. The release of his first song gave him his breakthrough in his career.

He wanted to represent himself as 1MB, which meant 1 Man Band. After his first single, he then recorded “Pheri tyo din”, which was equally as successful as his first one. After the hit of those two songs, he decided it’s time to release an album. He was scrutinized because of the autotune feature, raising doubts among many that he actually does not possess any vocal talents. Despite the criticisms he got that his songs became popular only because of new effects, he kept going. He released his first album which was called “Shunya”.

Pokharel did not have much money for recordings, but he earned a few from his job at Radio Sagarmatha. He had to do a few voiceovers there, and also sing on ad jingles. Those extra tasks were giving him a bit of extra money which he used for album recording. He was so broke that he even sold two of his wife’s gold bangles for his album. His wife was very supportive and did not hesitate to help.

After releasing his first album, he became a hit singer. The expectations from audiences grew and pressure started building up. There were companies that were forcing him to release albums every year because of his talent. But Pokharel did not want to follow the general rule and wanted quality in his work rather than just releasing contents.

He still had his Radio Sagarmatha job and later became the chief librarian there. The responsibilities got even heavier after that. But even though he got promoted, he left his job for music.

From then, he has continued his journey in music only. He did not stop and it has already been two decades of Sugam being an undefeatable singer. He repaid his debt that he owned his wife and had a pretty successful career.

Sugam Pokharel is the youngest son of the family. He has two elder brothers and two elder sisters. He completed school in Biratnagar and came to Kathmandu for further studies. He is married to Liza Pokharel and they have a daughter together, Angeliza Pokharel.

Pokharel was a man who had a strong will power. The day he decided to do something he would do it. And his decision to become one of the most loved singers of Nepal and perform on a big stage became a reality.

Pokharel has made headlines about transgressions and addiction to wrong substances but came back as a changed man. His fans are loyal to him as Pokharel is to music.